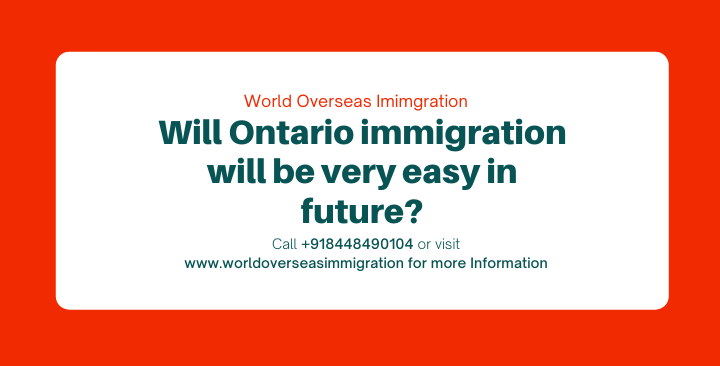 Will Ontario immigration will be very easy in future?

Ontario labour minister seeks more immigration and better worker conditions. Ontario’s minister of labour, who also oversees immigration, is calling for legislative changes to make the province a more attractive place to work. Monte McNaughton introduced the “Working for Workers Act” on October 25. If it gets passed, it could mean big changes for Ontario workers.

In short, the Ontario PNP wants to see the requirements eased on newcomers getting licensed in non-health-related occupations. Namely, they want to remove the requirement for regulatory bodies to require Canadian work experience, eliminate the need to do a language test for the purpose of licensing, and speed up the licensing process, especially in cases of emergency. “It is imperative that we recognize credentials of new Canadians and get them to pass their licensing requirements and get them into these meaningful jobs if we want to build our province,” McNaughton told CIC News over the phone. McNaughton cited labour shortages in skilled trades occupations that will only increase as more workers retire. He also referred to a recent study that suggested Ontario would see an additional $12 to $20 billion added to its economy if the skills gap between immigrants and Canadian-born workers was addressed.

The proposed legislation for regulatory bodies does not currently include healthcare occupations. McNaughton did not explain why, but said the government hopes to change that in the near future.

If passed, Ontario would be the first province in Canada to eliminate the requirement for Canadian work experience in regulated occupations. It would also be the first to introduce “right-to-disconnect” policies, and to ban non-compete agreements.

Employers with 25 or more workers would have to implement a policy that would allow employees to disconnect from their jobs at the end of the work day. The new legislation would also restrict employers from implementing non-compete agreements, where workers have to sign a contract saying that, for a certain amount of time, they will not work for a competitor after they leave their company.

A media representative from the minister’s office said the entire process could take two years to go into effect, including the legislative process as well as implementation. The minister hopes the bill will be passed before Ontario’s election in June 2022. This is important because when Ontario goes into an election, all of the bills being considered by the Legislature cannot move forward unless they are re-introduced in the new session. The minister’s office currently does not have a date for when the debates will begin.

Beyond the amendments to laws governing regulatory bodies, the immigration minister would also like the federal government to give more immigration powers to Ontario. For 2021, the federal government has allowed Ontario to welcome 9,000 newcomers through its Provincial Nominee Program (PNP). McNaughton would like to see that doubled due to the ongoing labour shortages that persist despite Ontario being the most popular province for new immigrants.

This year we prioritized healthcare workers and skilled trades workers but that number really needs to increase because of the huge labour shortage we have,” McNaughton said. “We are well positioned to match these newcomers to jobs that are going unfilled.”

Immigrate to Canada without a job offer: Saskatchewan PNP