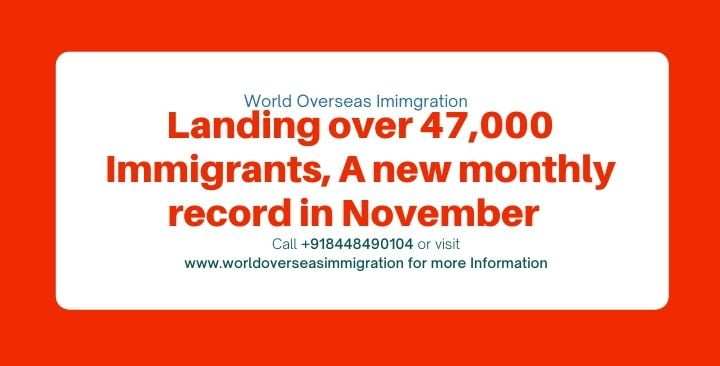 Landing over 47,000 Immigrants, A new monthly record in November

This is a modern era record (such data is readily available only in 1980). This is the third consecutive month that Canada has broken the record.

The data also shows that Canada has now taken in more than 361,000 immigrants in the first eleven months of this year. Considering that each of the past three months has brought in more than 45,000 immigrants, it appears that Canada will achieve its 401,000 immigrant target by the end of this year. An increase in the Omicron version could complicate such efforts, but given the IRCC’s focus on relocating to permanent residency within Canada, the department should still be able to achieve its goal.

Before the pandemic, about 30 percent of new economic class permanent residents lived in Canada at the time of landing while some 70 percent came from abroad. This has been reversed in 2021 with about 70 percent landing from within Canada and about 30 percent arriving from overseas. The IRCC has made this change to enable it to achieve its Immigration Level Plan target of landing 401,000 new permanent residents this year.

Changes the IRCC has made include focusing the Express Entry draw on Canadian Experience Class (CEC) candidates and launching six streams in May to move 90,000 international students and temporary foreign workers residing in Canada to permanent residence Can go

Before COVID, Canada landed between 25,000 and 35,000 immigrants per month, with figures higher during the warm spring and summer months. Canada got off to a slow start this year before ramping up landings in June. The period between June and November has been particularly noteworthy as Canada steadily brings in more than 35,000 new permanent residents each month, including setting three consecutive monthly modern records since September.

Canada brought in more than 340,000 immigrants in 2019 and had its eyes set on the same target in 2020 before the pandemic got in its way. It landed just 184,000 last year, but doubled down on immigration by seeking to tie its annual immigration record in 1913. The motivation behind entering at least 401,000 each year starting in 2021 and beyond is to support Canada’s post-pandemic economic recovery. ,

Achieving the target has been one of the top priorities of IRCC in 2021. Now that they are achieving this goal, the IRCC will elaborate its priorities after issuing a new mandate tomorrow.

British Columbia PNP: Immigrate to Canada without a job offer