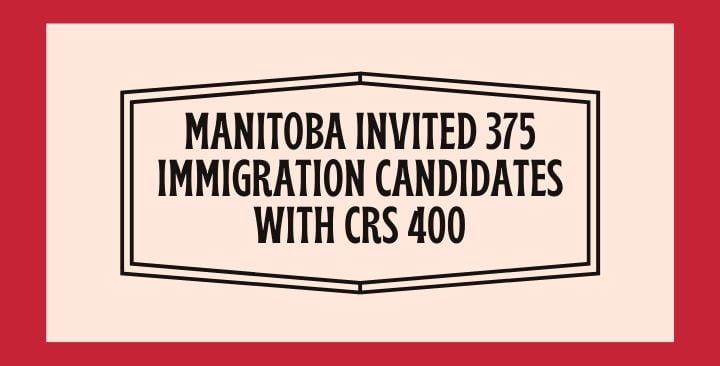 Manitoba invited 375 immigration candidates to apply for a provincial nomination on July 29, just two days after its largest draw ever.

Invited candidates can now apply for a nomination from the Manitoba Provincial Nominee Program (MPNP). If they successfully receive it, the nomination will support their final application for Canadian permanent residence.

Here are the results of the latest draw:

A total of 42 invitations, also known as Letters of Advice to Apply (LAAs), went to Express Entry candidates.

Manitoba manages its immigration programs through the MPNP, which supports immigration applications to the federal government. Canadian provinces do not have the ability to give out permanent residency status, but they can help an application along by issuing provincial nominations.

If you want to benefit from a nomination from Manitoba, you need to register an Expression of Interest with the MPNP. This puts you in a position to receive an LAA through the Skilled Workers in Manitoba and Skilled Workers Overseas streams.

The Skilled Workers Overseas Category and Skilled Workers in Manitoba streams are designed to allow the province to identify candidates who meet its labour market needs.

Candidates overseas need to demonstrate connections to Manitoba through the likes of close family ties, previous experience in the province, or an invitation through one of Manitoba’s Strategic Recruitment Initiatives. You do not need to be living in Manitoba at the time of your application to be eligible.

In order to receive an invitation under the Skilled Workers in Manitoba category, you need to have a full-time job offer from a provincial employer.

International graduates who complete education in Manitoba can receive an invitation under the International Education Stream if they can demonstrate that they have in-demand skills.

Eligible candidates get a score based on the Comprehensive Ranking System (CRS). Points are awarded for skilled work experience, education, age, official language ability, among other factors. The highest scoring candidates get an Invitation to Apply (ITA) for Canadian immigration. If the federal government approves them, they become Canadian permanent residents.

Express Entry is the most popular immigration pathway. According to the federal government’s 2021 immigration targets, Express Entry-managed programs are expected to account for 108,500 new permanent residents this year alone.  Submitting a profile in the Express Entry pool is the first step to applying for a provincial nomination to Manitoba.