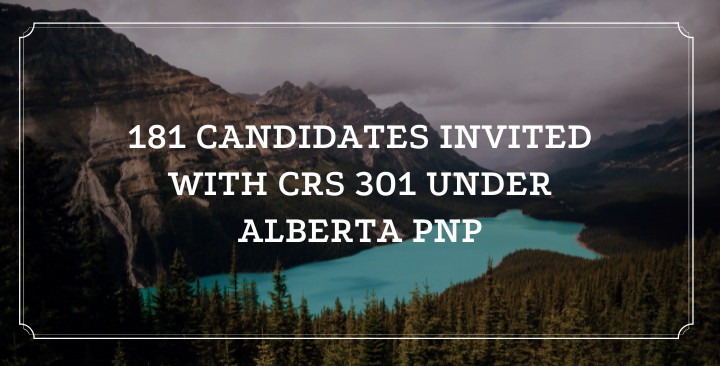 Compared to Alberta’s previous Provincial Nominee Program (PNP) draw in June, more candidates were invited in this draw, and the CRS requirement was slightly lower. Alberta has now invited 2,613 Express Entry candidates to apply for a provincial nomination. Alberta is allowed to issue 6,250 nomination certificates in 2021.

What is Alberta Express Entry Stream?

The Alberta PNP Immigrant Nominee Program (AINP) is an economic immigration program. Particularly, ANIP operated by the Government of Alberta with the Government of Canada’s department of Immigration, Refugees and Citizenship Canada (IRCC). In short, it supports Alberta’s economic growth by attracting and enjoying work-ready people to the province. The AINP is a partnership between Citizenship and Immigration Canada (CIC) and the Government of Alberta. In fact, it seeks skilled and semi-skilled foreign nationals who can immediately enter the Albertan workforce. In conclusion, results in benefit the economy as soon as possible.

If you are eligible for Express Entry, you will get a score based on the Comprehensive Ranking System (CRS). You get points depending on your age, education, work experience, language ability in English or French, and other factors.

It is possible to immigrate through the Express Entry system without a provincial nomination, however, people who have lower CRS scores may opt for a PNP. Provincial nominees automatically get 600 points added to their overall score. If the lowest-scoring candidates in the new Alberta draw receive the nomination, their new CRS scores will be 901, more than enough to be invited in a subsequent Express Entry draw.

What is the eligibility for Alberta Express Entry Stream?

Your Express Entry profile should indicate that you have an interest in moving to Alberta. Certain factors increase your likelihood of being nominated, like having work experience, or a job offer in Alberta. It also helps your application if you have a parent, child, or sibling who is a permanent resident or citizen in Alberta.

Saskatchewan PNP invited 280 candidates with the score of 77