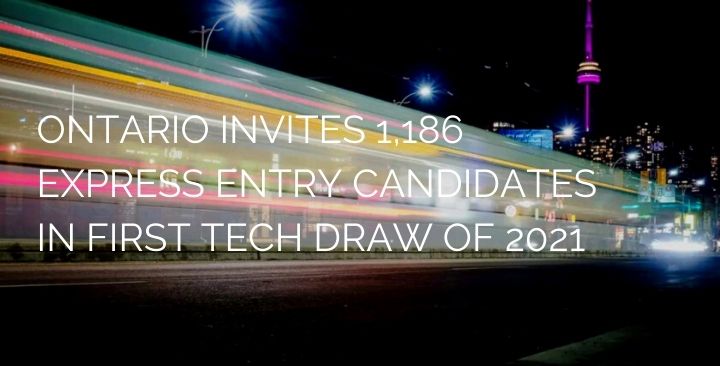 Ontario’s latest tech draw took place on February 16 A total of 1,186 express Entry candidates were invited to apply for a provincial nomination.

The Ontario Immigrant Nominee Program (OINP) issued the invitations to Express Entry candidates with Comprehensive Ranking System (CRS) scores between 453 and 467. The OINP issued invitations to candidates who may be eligible for a nomination under the Human Capital Priorities stream.

Invited candidates will need to demonstrate that they have eligible work experience in one of the targeted occupations, in order to get the Provincial Nominee Program (PNP) nomination. These six occupations include the following:

Those who received an invitation now have 45 calendar days to submit their application for the PNP.

Those who receive the nomination from Ontario will automatically get an additional 600 CRS points toward their overall score. This boost will effectively guarantee that the successful candidates will receive an Invitation to Apply (ITA) in a subsequent Express Entry draw. This goes for anyone who gets a provincial nomination from any PNP.

This is Ontario’s first Tech Draw of the year. The previous Human Capital Priorities draw invited Express Entry candidates in targeted occupations, especially in finance, and health occupations, among others. Last year, Ontario invited 6,716 Express Entry candidates to apply for a provincial nomination through the Human Capital Priorities stream. This was the largest proportion of all the Express-Entry linked PNP nominations that Ontario issued in 2020.

How to get invited to an Ontario Tech draw

The first step in becoming eligible for an invitation through the OINP Tech draw is to create a profile in Canada’s express entry system.

Express entry candidates are ranked according to the Comprehensive Ranking System (CRS) based on their education, work experience, age and language proficiency in English or French.

The OINP Tech draw draws from the express entry pool of candidates, inviting qualified technical staff from Ontario to apply for a provincial nomination.

Once they are approved by the federal government, these new permanent residents will get to settle into their technology careers in Ontario.