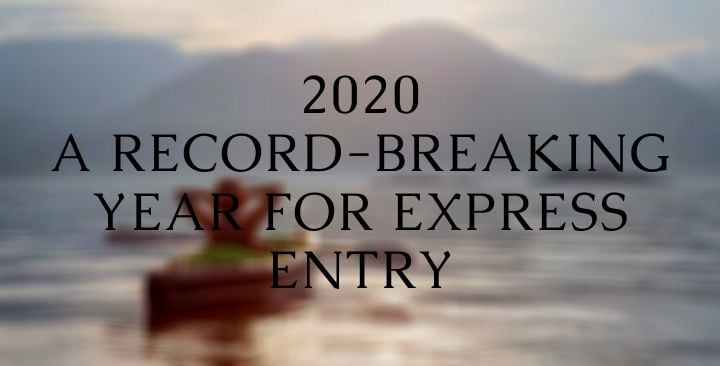 It was the biggest year in the history of the express entry system, as Canada hit immigration levels in the hit 2020.

Canada concluded the year by issuing 107,350 invitations for Express Entry candidates to apply (ITAs). This was the highest invite to the express entry system after managing Canada’s pool of candidates for three federal high-skilled immigration programs — the Federal Skilled Worker Program (FSWP), the Federal Skilled Trades Program (FSTP and the Canadian Experience) in 2015. Class (CEC) – as well as some of its Provincial Nominee Programs (PNP).

Canada’s Department of Immigration, Immigration, Refugee and Citizenship Canada (IRCC) conducted 36 invitation rounds in 2020. This is 10 more than last year as there were draws targeting only CEC and PNP candidates in the initial weeks of the epidemic IRCC. This was done in an effort to prioritize express entry candidates who were already in Canada.

2020 broke records in both the biggest and smallest express entry draws ever. The shortest draw was the PNP draw on 15 April, with just 118 invitations issued. At the end of the year, Canada began handing over 5,000 ITAs at one time. The increase in draw size could be an attempt to reach next year’s immigration target of 401,000 new permanent residents. Those who apply for permanent residency after receiving an ITA are usually given a decision in six months, so at the end of the year candidates receiving the ITAS will begin to become permanent residents in 2021.

The increase in targets is due to the low admission levels Canada saw in 2020. Travel restrictions in Canada and around the world made it difficult for many to make their landing in Canada.

The year started off with consistently increasing draw sizes. The largest in the first quarter was on February 19, when IRCC issued 4,500 invitations.

There was a PNP-only draw on March 18, the same day Canada’s travel restrictions first went into effect. That draw only rendered 668 ITAs. This would be the first in a new pattern of Express Entry draws, where IRCC would hold a small PNP-only draw followed by a larger CEC-only draw. The two draw sizes would add up to a round number, oftentimes between 3,600 and 3,900.

There was one all-program draw in July, and another in August. Canada went back to holding consistent all-program draws in September. From then, the numbers climbed from 4,200 to a record-breaking 5,000 ITAs per draw.

There was only one Federal Skilled Trades draw in 2020. A total of 250 skilled trades workers were invited on August 6.

The Comprehensive Ranking System (CRS) score cutoff is determined by how many top-scoring candidates Canada decides to invite in any given round. The date and time of when the candidate entered the pool is a factor when IRCC applies the tie-break rule to candidates who are tied for the minimum CRS cutoff.

In all-program draws, it doesn’t matter what program candidates are in. IRCC just invites the top scoring candidates. PNP-specific draws typically have higher score requirements because having a provincial nomination automatically awards candidates an additional 600 points toward their CRS score.

CEC draws have lower score requirements because they are not competing with other high-scoring candidates in the FSWP or the PNP. FSTP draws have lower CRS cutoffs because Canada only invites a few at a time, and they make up a much smaller portion of the Express Entry pool of candidates.

In order to reach the targets for next year, Canada will have to approve about 8,946 Express Entry candidates per month. At two draws per month, that’s about 4,473 candidates.

To account for candidates who may no longer want to come to Canada, or who do not get approved, Canada will have to invite upwards of 4,500 candidates per draw in 2021.