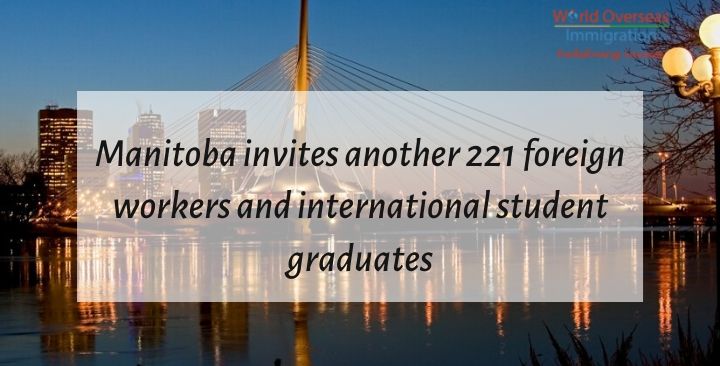 Manitoba has invited 221 immigration candidates to apply for a provincial nomination for permanent residence in Canada.

The invitations, also known as Letters of Advice to Apply (LAAs), were distributed as follows:

This brings the number of LAAs issued by MPNP to 7,362 this year.

Of the 221 candidates invited to the December 6 draw, 18 were profiled in the express entry pool.

Express entry candidates are awarded a score based on a comprehensive ranking system (CRS) that measures human capital factors such as age, work experience, education, and language ability. Candidates with the highest scoring are invited to apply for permanent residency in Canada through regular draws from the express entry pool.

Express Provincial candidates who receive a Provincial nomination are awarded an additional 600 CRS points, which guarantees an invitation to apply for Canadian permanent residency in subsequent Federal Express entry draws.

To be considered for a provincial nomination from Manitoba, Express Entry candidates must have eligible work experience in a demanding occupation of Manitoba, among other requirements. They will also have to present a separate expression of interest for the MPNP.

To be invited for a provincial nomination from Manitoba through both skilled workers in Manitoba and skilled labor migrant categories, candidates are required to file an Expression of Interest (EOI) with the MPNP. An EOI is an online profile excluded from a score of 1,000. Points are awarded for a candidate's education, work experience, connections to Manitoba and language proficiency in English or French, among other factors.

A specified number of candidates who score the highest receive an LAA, allowing them to apply for provincial nomination for permanent residency in Canada. In the latest draw, the lowest ranked candidate invited under a skilled worker in the Manitoba Stream had a score of 522.

The lowest ranked candidate invited Stream had a score of 718.

The skilled labor migrant of the MPNP allows the MPNP to select and enroll skilled foreign workers who can help support Manitoba's labor market. Candidates must have an established relationship with Manitoba such as close family or friends,or an invitation through MPNP’s strategic recruitment

They do not need to be in Manitoba at the time of application to qualify. The 23 candidates invited through the Skilled Worker Overseas Stream were directly invited by the MPNP as part of a strategic recruitment initiative.

Candidates invited through a skilled worker in the Manitoba category must work in Manitoba and be offered a full-time, permanent job from their employer.

Manitoba graduates with some demand skills may be invited under the International Education Stream.

This stream consists of three sub-categories: