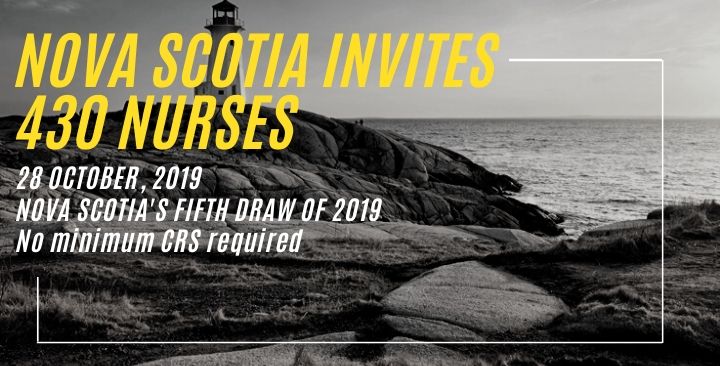 The largest draw since the introduction of the EOI system in July 2018 – a total 430staff nurses invitations were issued to express entry candidates who had separate profiles with Nova Scotia PNP.

Job offer letter is not mandatory to apply for Nova Scotia PNP. To be eligible, applicant must have experience in the occupation which is In-Demand occupation list of Nova Scotia.

A provincial nomination results in an additional 600 points toward an Express Entry candidate’s Comprehensive Ranking System (CRS) score and effectively guarantees an invitation to apply for Canadian permanent residence from the Government of Canada.Other than the express entry program, there are also Provincial Nominee Programs (PNPs) that are also having low CRS requirements in comparison to express draws.

According to the Nova Scotia Nominee Program (NSNP), there was no minimum CRS score required for this draw.

This was Nova Scotia’s fifth draw through the Labour Market Priorities Stream in 2019. PNP has also sent the invitation to the below.

Minimum Eligibility criteria for nursing candidates invited by Nova Scotia in the October 28 draw is as below.

Applicant has received the invitation within 30 days from the date of their NSNP submittinga complete application.

The NSNP allows Nova Scotia to nominate a set number of immigration candidates for Canadian permanent residence each year through nine streams tailored to specific economic needs in the province.

World overseas immigration Consultancy can help you to get PR visa for Canada & Australia. You can come in the office directly for any immigration process query. But it will be beneficial for you complete your free assessment visa form or call us on +91 9810366117 before the meeting. So that the consultant has all the knowledge about your profile and he can guide you properly.