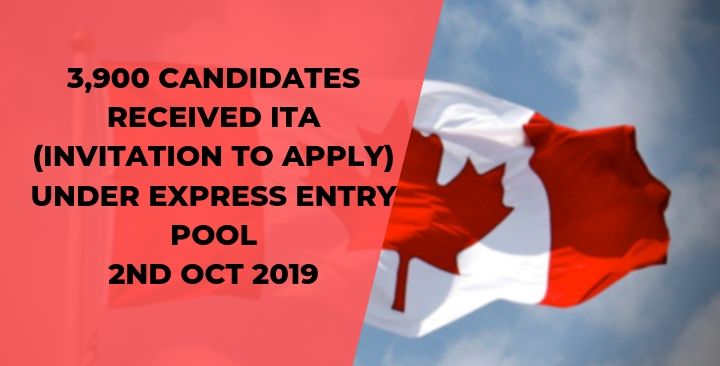 Comprehensive Ranking System (CRS) score gone 464 on 2nd October 2019. Candidates who wants to get selected under Express Entry pool need to have minimum this score.

Job offer from Canadian Employer is not required to enter or be selected from the Express Entry pool.

Express Entry Program is a point-based system that manages the profiles of the candidates who want to move to Canada under any of the below three major skilled economic programs like:

Candidate has to submit their profile into Express Entry pool. Candidate will be ranked according to the Comprehensive Ranking System (CRS) score of all the peers existing in the pool. TheComprehensive Ranking System (CRS) will be evaluation on the basis of Age, Education, Experience, Language and adaptability. Only those candidates can apply for the Canada Permanent Resident visa whose profile is available in the Canada occupation list 2019. The highest-ranked candidates are invited to apply for Canadian permanent residence during regular draws from the pool.

Calculate your CRS score for Canada Immigration in 2019 with the help of CRS calculator!!!

Comprehensive Ranking System (CRS) has been reduced by 1 point this time in the Express Entry Latest draw. It means that the candidates, who have entered in the express pool before the used time stamp and have the minimum CRS score of 462 points, were issued the ITAs in the latest express draws.

If maintained over the final quarter of 2019, the increased draw size could help IRCC surpass its single-year ITA record of 89,800 invitations that was set last year.

Below is the Canada PNP Candidate Can apply under Express Entry Program.

Since the last Express Entry draw on September 18, province nomination program has targeted a huge number of Express Entry candidates.

World overseas immigration Consultancy can help you to get PR visa for Canada & Australia. You can come in the office directly for any immigration process query. But it will be beneficial for you complete your free assessment visa form before the meeting. So that the consultant has all the knowledge about your profile and he can guide you properly.